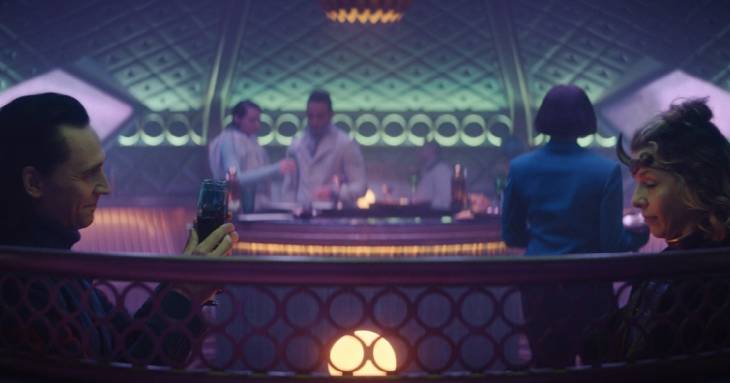 Last week saw the reveal of a female antagonist rather than the hinted “Future Loki”. Will we get more background?

This week’s episode opened with what may be the longest-running Marvel Studios bumper in the history of time. We then see Sylvie probing the mind of the TVA officer she kidnapped in the last episode. She learns how to find The Time Keepers so she runs off to the TVA, quickly followed by Loki.

Sylvie kills several guards at the TVA before Loki confronts her. They scuffle briefly before but are stopped by Ravonna. Loki uses the last bit of energy in the TemPad to open a gateway where he and Sylvie drop into the planet Lamentis – 1 in 2077. Not only is the TemPad out of energy, but the moon is on a collision course with the nearby planet.

Loki and Sylvie reluctantly agree to work together if they are to escape certain doom. The only way off is via “the ark”, an evacuation vessel. They sneak onboard a train headed for the ark in hopes of recharging the TemPad. There they tell each other a bit of their respective backstories. However, before long Loki blows their cover and the two get tossed off the train.

Loki then realizes the TemPad is destroyed. Sylvie tells him that the ark never takes off and the planet collides with the moon, killing all life. Now, with no TemPad, they are doomed to die with everybody else. The only way to survive is to get on the ark and ensure it takes off. This, of course, goes against history.

The final minutes of the episode see Loki and Sylvie fight through the streets, desperately trying to make it to the ark… only to see it destroyed before it can take off.

This definitely was The Loki & Sylvie Show, since they were basically in every scene together. Fortunately, Hiddleston and Sophia Di Martino have great onscreen chemistry. For those that may not know, Sylvie is the name of a version of Enchantress in the comics. My hunch is this MCU Sylvie might be Loki’s offspring. That would effectively make her a variant of sorts while also being Enchantress. Or maybe she’s Mephisto…