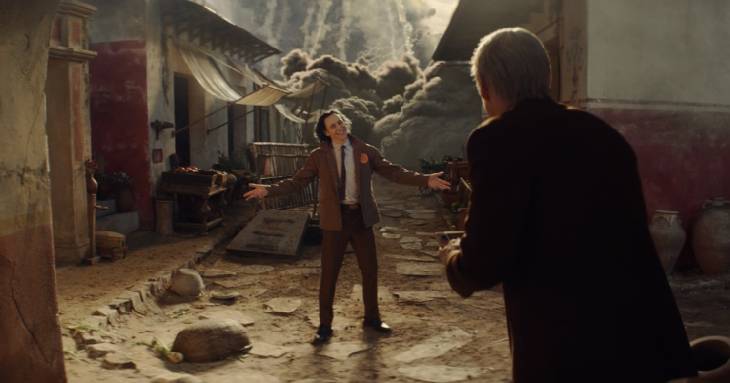 SPOILER WARNING! Do nor proceed if you do not want to know what happens in this episode!

It’s fitting that an episode of a series with a Norse god would start off in a RenFair. What’s hilarious is the scene also uses Bonnie Tyler’s song “Holding Out For A Hero”, which has been used a lot lately in other TV show and game trailers. Anyway, the alleged “Variant Loki” kills some TVA agets, but takes one female with him when he escapes.

As Mobius and the rest of The TVA investigate, they notice that one of the agents appears to have been taken as a prisoner. Loki warns them not to search for her because Variant Loki wants them to do that. Mobius calls Loki’s bluff and the team wipes out all the evidence of the time breach.

Back at The TVA, Ravonna warns Mobius not to trust Loki. Loki tries to explain his actions that he was simply trying to show what makes him tick. Mobius responds that he doesn’t care about what makes him tick, he just wants to catch the Variant Loki. Mobius assigns Loki the task of reading up on his variant counterpart.

Of course, Loki tries to read up on The TVA itself, hoping to find a way to take over. Instead, he finds he only has access to files about the variant. He still finds information on the destruction of Asgard. He then realizes that if he was to go to an apocalyptic point in time, he could do anything he wanted and not hurt the timeline. Loki explains this to Mobius at the expense of Mobius’s lunch.

Mobius reluctantly takes Loki to Pompeii in 79 AD to test the theory. Sure enough, they find no variance in the timeline despite Loki warning all the people that they were about to die. Mobius pairs this with the knowledge that Kablooie candy is found at the time breach scenes. They are able to deduce that the Variant Loki is using Alabama in 2050 as his home because an apocalypse happened there and a superstore has plenty of the candy.

When The TVA arrives, one of the agents insists Loki stays with her. Loki convinces Mobius to let it happen. It turns out that the Variant Loki is using an enchantment spell to get people to do his bidding. When Loki finally comes face to face with the Variant, he finds that it is not Loki at all, but ENCHANTRESS! She tells him it was never about him and starts detonating all the time reset capsules placed around the store.

As Enchantress makes her escape, Loki jumps after her, potentially leaving Mobius and the rest of the TVA to be erased by the time reset…

This was a very good follow-up to the premiere. We’ve seen enough to get the plot while leaving enough questions unanswered. It’s a fairly safe bet that Loki will still try to stop Enchantress because he will not want to lose to anybody…