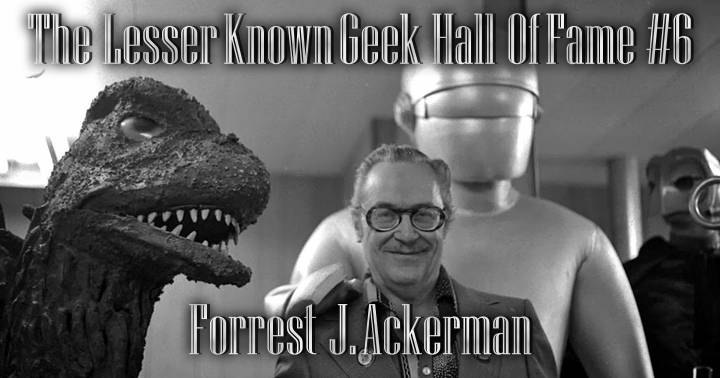 One of the things we emphasize with the Lesser Known Geek Hall Of Fame is that no franchise, hero, villain, etc. is ineligible except “A-Listers”. This also applies to real-life people as well as fictional characters.

This episode inducts the first real-life person into the Lesser Known Geek Hall Of Fame, Forrest J Ackerman. While the name may be familiar to people, how his name got known in the first place is something they may not know.

In short, Forrest Ackerman (or “Forry”, “4SJ”, “The Ackermonster” “Dr. Acula”, or the many other names he went by) could be considered the world’s first fanboy. In fact, many of the geek customs can be linked back to him.

The Fanzine? He was among the first to get them going with contributions for The Time Traveller and Science Fiction Magazine.

Cosplay? He attended this convention in a costume designed to look like something from the future.

Friends and Influences? Far too many to list. As Seth says during the show, if there are Six Degrees Of Kevin Bacon, there’s a One or Zero Degree of Ackerman. He seemed to know everybody in the sci-fi/fantasy community.

Perhaps the most historic example of his early acquaintances was made during his time writing for Science Fiction Magazine in the early 1930s. Two men that worked for that magazine were Jerry Siegel and Joe Schuster. So this means he worked with Siegel and Shuster BEFORE they created Superman

His main body of work was as a literary agent for many of the sci-fi greats. He worked with Ray Bradbury, Isaac Asimov, L Ron Hubbard, and many others. He also ran the magazine Famous Monsters Of Filmland through most of the 20th Century.

With so many connections in Hollywood, it was not surprising that he wound up getting several small roles in various sci-fi and horror films. His IMDB page has over 70 entries as a result.

He’s credited with creating the name Vampirella for the cult-favorite comic character, as well as coining the term “sci-fi”. And that’s just scratching the surface of his contributions to the world of sci-fi and fantasy.

Ackerman passed away in 2009 and the ripe old age of 92, but it will easily be another 92 years and we will still be seeing elements of the genres left by him. He was that influential.