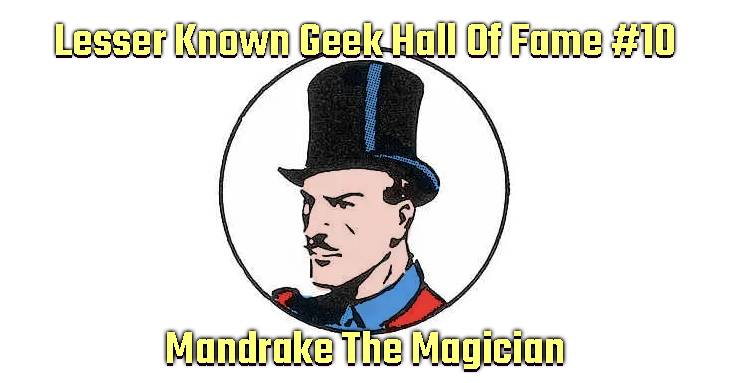 Mandrake The Magician was created by Lee Falk, who also famously created The Phantom. Like The Shadow, Mandrake’s main power is the ability to hypnotize (The Shadow would call it “cloud minds”). But Mandrake has shown true magic abilities that defy physics.

While Mandrake officially first appeared in newspaper strips in 1934, Falk actually created the character a few years earlier as a teenager. Since The Phantom debuted in 1936, many historians consider Mandrake to be the first superhero.

Like The Phantom, the bulk of Mandrake’s adventures were told by Falk in daily comic strips by King Features Syndicate. Falk wrote all the stories up until his death in 1999. Artist Fred Fredericks took over writing and did double-duty until his retirement in 2013.

Mandrake’s strips were reprinted in Magic Comics, an anthology comic book title published by David McKay Company. That title would also feature Dagwood of Blondie fame on the cover

Mandrake’s origin has been retconned several times over the years. Mainly to add details or layers to his history. For the longest time, the story was that Mandrake and his brother had attended The College Of Magic in Tibet under the tutelage of Theron, a powerful magician and that Mandrake was sent there by his father, Basil The Great.

In reality, Theron was his father, and Basil The Great was thought to be his father. Theron handed Mandrake and Derek to Basil shortly after birth because their mother had died. Theron only revealed this when he was on his believed deathbed.

A real-life stage musician also went by the name Mandrake. His appearance strongly resembled the comic strip counterpart, so much so some believed Falk based the character on him. Others believed he merely adopted the look after the character was published. Unfortunately, little, if any, evidence conclusively shows which came first. But since copyright laws and intellectual property

Mandrake – The title character has had his origin rewritten a few times. But through it all, he trained in a College of Magic in Tibet for several years (between 7-10). By day he is an in-demand practicing stage magician who uses illusions and hypnosis. He keeps his most powerful magic a secret as he uses it to combat evil. While his stage shows have the usual “Hide the bird in the hat” type illusions, his crime-fighting tricks are much stronger. He has been able to make himself invisible, project visions of events, and made people see monsters and giant serpents.

Lothar – Mandrake’s trusted friend Lothar is an African Prince, originally prince of Seven Nations (later Twelve Nations) in Africa. He has been called The Strongest Man In The World. He has shown feats of strength such as lifting large animals. Lothar is one of, if not THE first black superheroes. His stature as an African prince/King is also the link between Mandrake and Falk’s other major creation, The Phantom!

Narda – A European princess and Mandrake’s love interest. Her beauty has led to her being the object of many villain pursuits over the years.

Hojo – A large Asian man who is a chef in Mandrake’s home of Xanadu. Like Lothar, he is very strong and also possesses a 10th-degree black belt in Judo and karate. Not only is he a dangerous opponent and master chef, but he is also the chief of Inter-Intel, a crime-fighting organization.

Theron – The mysterious man who runs the College Of Magic in Tibet and Mandrake’s father. He claims to be over 300 years old and to have been married 12 times. Mandrake did not learn the truth of who his father was until he was an adult and well out of the College Of Magic.

The Cobra – The Cobra is probably Mandrake’s biggest villain. In fact. he appeared in the very first Mandrake adventure published in 1934. The Cobra began life as Luciphor and helped teach at the College Of Magic in Tibet. Luciphor tried to steal The Cube from the college. He fled the college and became The Cobra. He was believed to have been killed in a laboratory fire. However, he returned later in a silver mask due to his face being severely burned. Eventually, his face was reconstructed and he was able to live without the mask.

Derek – Mandrake’s twin brother and fellow student in the College of Magic. He became a criminal using his powers to rob people and banks. Eventually, Mandrake had to confront his brother and take his powers away. While his more potent powers were gone, he retained the sleight of hand techniques.

Octon – Unlike other villains, Octon never had a human face in any of the stories. Octon, or 8, was usually some form of artificial intelligence be it a computer or mechanical device.

Mandrake The Magician (1939) – A film serial was made in 1939 which had The Wasp as the main villain. Unlike the strips, this Mandrake was clean-shaven. Though he was portrayed by Warren Hull.

Mandrake (1979) – Simply entitled Mandrake, the two-hour TV movie aired in 1979 as a pilot for a proposed series. Mandrake was also clean-shaven in this version as well. One of the main deviations from the comics is that Mandrake wound up in Tibet due to a plane crash that killed everybody except him as a young boy. The cast is a plethora of 70s TV actors. Veteran character actor James Hong portrayed Theron. Real-life celebrity magician Harry Blackstone Jr. had a supporting role as well.

Defenders of the Earth (1986) – A daily animated series produced by Marvel featured Mandrak and Lothar alongside Flash Gordon and The Phantom. The series also starred the offspring of all the heroes as kind of the next generation of heroes in the year 2015.

Other comics featuring Mandrake The Magician have been published in recent years. Marvel’s Star Comics brand had a Defenders of the Earth adaption in the 80s. Marvel itself even had a limited series in the 1990s. Dynamite Comics published titles featuring Mandrake, The Phantom, and Flash Gordon in what they call their King: Dynamite titles since all three have their origins in King Features.

Red 5 Comics has the title Legacy Of Mandrake which features a female protagonist, Mandy Paz, who lives in a building owned by Mandrake. She discovers magic by finding a magic mirror.