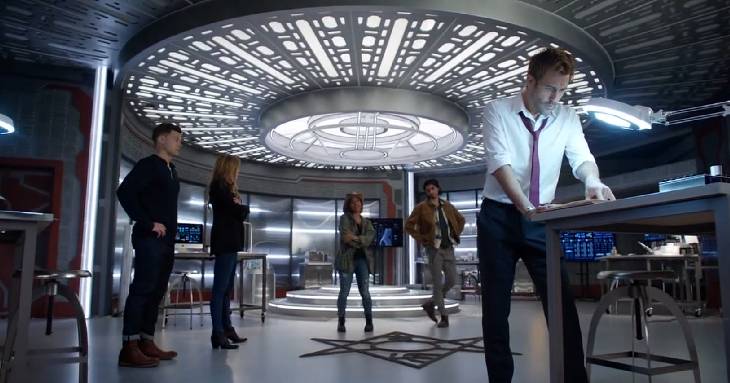 Season Six of DC’s Legends Of Tomorrow has finally arrived! While the show’s return is welcome, the news of Dominic Purcell’s departure as a regular does put a damper on things.

The episode opens with Mick partaking in one of his favorite pastimes: Eating. However, all but one of the other Waverider crew are passed out drunk. The only one not present? Sara, who’s been abducted by an alien while talking to David Bowie.

Apparently, during the celebration of Astra’s soul reclamation, Constantine hooked up with Zari (It’s a CW show… Everybody hooks up with everybody at some point). The heroes begin their search of Sara but find out the DEO was destroyed in 2020.

Meanwhile, on the alien spaceship, Sara frees Spartacus (yes, that Spartacus) and looks for the bridge. Her quest is short as Spartacus is promptly eaten by one of the aliens they encounter. The other alien turns out to be Gary, who has actually been posing as a human for the last several seasons.

The Legends enlist the help of a former alien abductee to find Sara’s location in space. By this time, Gary has tried opening a wormhole to fly home. Ava sends an astral projection message to Sara saying she will marry her when Sara comes home. Sara breaks out and manages to knock the remaining alien out of the airlock, Aliens style.

In the final moments, Gary steers the ship towards the wormhole, only to see it close before he is able to fly into it. He and Sarah are marooned on the ship as it begins spinning uncontrollably through the cosmos.

This was an entertaining season premiere. That said, it didn’t have the blockbuster movie vibe that previous seasons had. Maybe it will get better as the season progresses. But other than a few laughs, there wasn’t much to it.