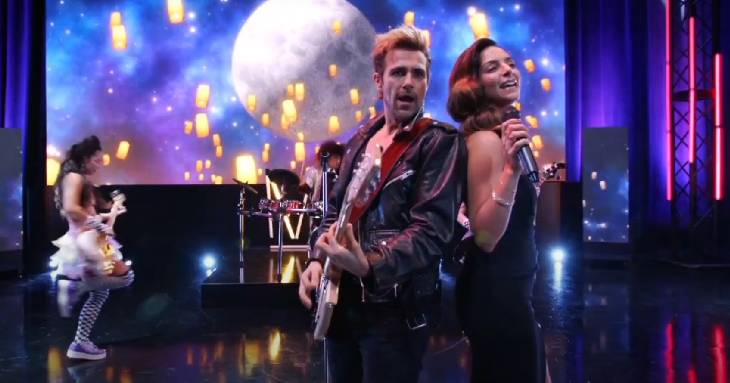 SPOILER WARNING! – Do not proceed if you wish to avoid spoilers!

When we last saw The Legends, they were trying to find the lost duo of Sara and Gary (who’s been a ghastly alien all this time and nobody knew). Sara has been bitten by some alien disguised as Amelia Earhardt.

In true Legends fashion, the episode starts with a strange alien coming out of the blue. This time it’s an armored being determined to battle Earth’s king. Somehow it deduces that a celebrity judge on a future game show is the king. And The Legends have to stop it from killing the judge.

The Legends spend the rest of the episode improvising their way through a competition show called Da Throne. They are able to convince (Knoxicrillan aka Knox) that duels are won via game competition rather than battle. Zari uses her stature as a celebrity to be a surprise entry into the competition and is able to wow the audience with her singing.

Unfortunately, the king judge has it in for Zari since they were previously an item and rigs the finals so Knox can win. It’s up to her and Constantine to cover a Buzzcocks song to win the day.

Meanwhile, Gary is able to protect Sara by battling (and eating) evil clones of Ava Sharpe. The last stinger sees a weakened Sara coming face to face with a character called Bishop, who says he’s been waiting to meet her.

The main story was a sendup of competition shows like X-Factor, The Voice, and America’s Got Talent. If you like that concept, you will like this episode. There were some good chuckles to be had, not only with the satire of game shows but the absurdity of Knox’s character and armies, who can seemingly jump through outer space in ships with comically large weapons.

The problem is it can be hard to balance comedy and suspense. I was caring less about Sara’s fate and more about catching the pop culture references in the main story. That said, I can see why somebody might like this episode a lot more than I did.