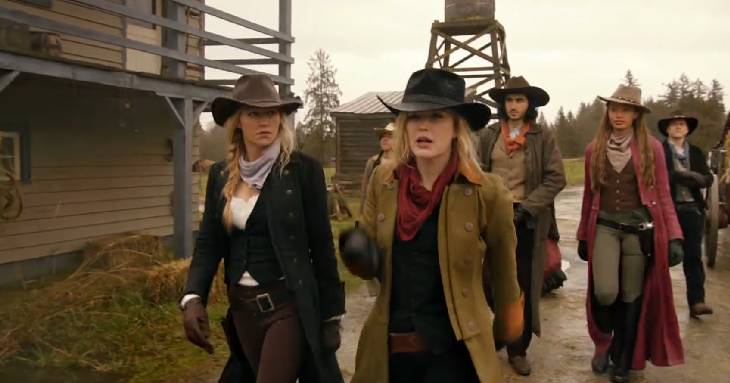 Back to the Old West!

The team welcomes back Sara since she’s been separated the entire season. Sara secretly confesses to Ava that she’s an alien hybrid clone. Before long, the team finds themselves traveling to 1891 Oklahoma and a town called Fist City. Sadly, no Loretta Lynn song to accompany them.

Things look like they’re going to turn sour very quickly when they go into a bar and accidentally spill a patron’s drink. To their surprise, the man does not get angry but instead smiles and offers to buy them drinks. Another cowboy starts singing a song to welcome their new neighbors. Basically the exact opposite of what you’d expect from the typical Old West environment.

Meanwhile, back on The Waverider, Constantine goes to Gary about finding The Fountain Of Imperium. When Gary asks him why he quietly explains that he had to surrender his magical powers. Gary tells him that the fountain is just a myth.

Nate notices that the sheriff is Levi Stapleton, who was an outlaw in history. The Sherrif should be Bass Reeves, who is now an outlaw. When Astra provokes one of the townspeople, he tries to pull his gun. When he does a giant worm rises out of the ground and eats him, Tremors style.

Astra and Spooner look for aliens in the woods where they are spied on by a masked man who turns out to be Bass Reeves. Sara challenges Stapleton to a duel. He agrees but cheats and shoots Sara in the back of the head. Sara heals almost instantanio8usly and approaches the sheriff. He calls off the deal and tries to reload his gun but the worm gobbles him up before he can finish.

Nate attracts the monster by ranting about all of the problems he’s had. Everything from nobody checking on him to changing the thermostat on The Waverider. The worm eventually appears and Nate changes into his steel-skinned form. Spooner is able to cause the creature to hesitate, giving Astra the chance to blow it up. Gary reveals to John that Aleister Crowley knows where the Fountain is.

Maybe I’m biased to westerns but I thought this was one of the better episodes in a while. There wasn’t a very clear explanation as to how the worms got there in the first place. It felt like a stand-alone episode, though it looks like the next episode will be very Constantine-heavy. It was also cool to see David Ramsay as an ancestor to Diggle.