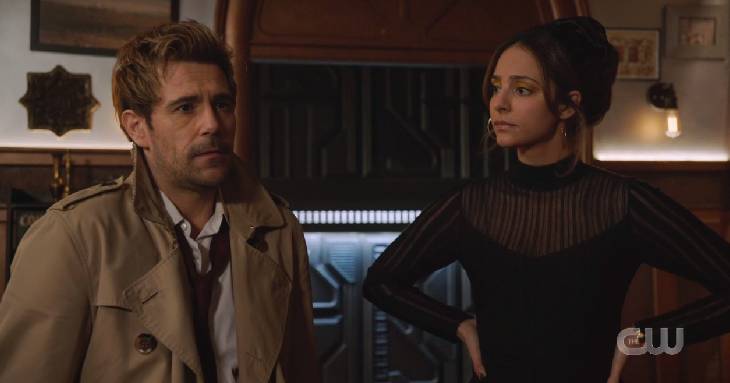 Are we finally getting to the main plot of the season?

This week’s episode picks up with Sara meeting Bishop again after believing she killed him last week. She is smart enough to tell that he is a clone of his previous self but does not know that there can only be one of him at any time. Of course, he wants to use his knowledge of cloning to reshape everything… for the good of course.

Mick and Kayla find Kayla’s ship. Kayla surmises that it needs a new fuel cell and that Sara is captured. Mick goes in but is quickly apprehended by Ava clones. Kayla then sees The Waverider suddenly take off. Rather than take Mick in as a prisoner, Bishop has the barrier around the ship lowered to let the poisonous atmosphere kill him. The clones tie him to a tree to prevent his escape.

Meanwhile, the rest of the Legends shack up in Constantine’s home. Unfortunately, once Gideon gets hooked up, she informs the group that a patient was admitted into a sanitarium under the name Sara Lance. On top of that, when the team goes to see her, they find it’s Amelia Earhardt… who flew in on The Waverider!

Gary shows up in Sara’s room via the toilet. He found where the fuel cells are so they can escape in Kayla’s ship if they can get to it. After Gary escapes back through the toilet, Sara tries to play to Bishop’s ego to stall for time. Gary, of course, fails miserably at retrieving the fuel cell and is also captured by Ava clones.

The team meets with Amelia. Astra finds out that Amelia was visited by Sara. However, Amelia begins quivering in her chair and turns into a reptilian-like monster before Astra can learn anything else. Spooner is able to understand the creature, as she hears it call her name. She seeks out the alien and is able to communicate in its own language. It tells her that it killed Sara.

Mick is able to free himself before succumbing to the poison. He grabs a fuel cell and meets back up with Kayla, who admits she was planning to steal The Waverider and abandon him. The two regroup inside the ship and engage in biological intercourse.

Sara turns the tables on Bishop and beats him into submission. She drags him to his office where she sees his next clone. In the final shot of the episode, she also sees her own dead body and realizes she has also been cloned.

This episode definitely had some entertaining moments. The main drawback this season to me is that this Bishop character just doesn’t seem to be a very formidable opponent. Sure, he can keep cloning himself, but to what end? Next to Time Travel, Cloning seems to be the go-to gimmick for sci-fi these days.