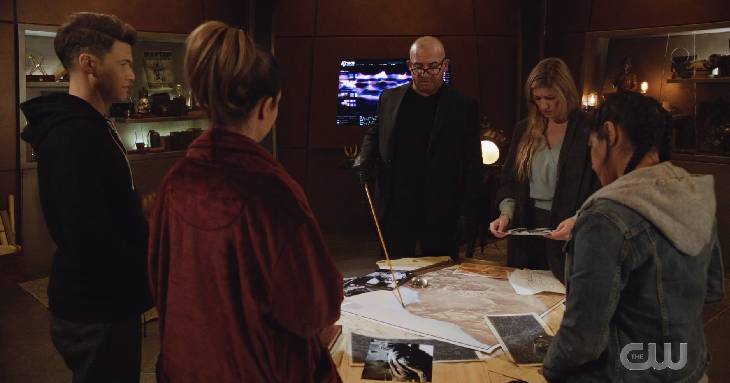 SPOILER WARNING! Do not proceed unless you want to know what happens in this episode.

Two soldiers in 1962 Cuba notice a large object flying towards them via radar. They assume it is an ICBM missile and prepare to die. However, there is only an impact with no explosion. When they run outside to see what happened, they find an alien pod instead of a warhead.

Rory calls the team together and tells them he’s found a lead on Sara’s alien captor, aka Kayla. They travel to 1962 Cuba without even bothering to change into appropriate attire. Mick believes the alien is being transported via a Soviet military truck. When the team captures it, however, they find it is actually a missile warhead.

Nate and Zari pose as diplomats in order to talk President Kennedy out of taking military action against The Soviets. Meanwhile, Ava poses as a surgeon to find the alien body while Behrad is mistaken for Che Guevara.

Before long, Kayla wakes up and escapes. Fidel Castro believes the alien was sent to kill him so he orders the missile launched as retaliation. Ava realizes that World War III is imminent and preventing that outweighs the need to find Sara. Mick and Spooner find Kayla, who believes the missile to be a spaceship. Mick bargains with Kayla to use The Waverider to find her ship.

Back in DC, Nate convinces JFK to not launch a nuclear counterattack, even though a missile is headed right for them. However, the missile merely impacts on the White House front lawn without detonating. It turns out Mick and Kayla disarmed the warhead before it launched. The good news is that DC is safe and there is no nuclear war. The bad news is, due to Mick’s and Kayla’s agreement, The Legends will have to stay behind while they go off to rescue Sara.

This was a little better than other episodes this season. The story with Mick leaving with Kayla is probably how he will be written off the show. We can only assume that The Legends will get the Waverider back when Sara is rescued.