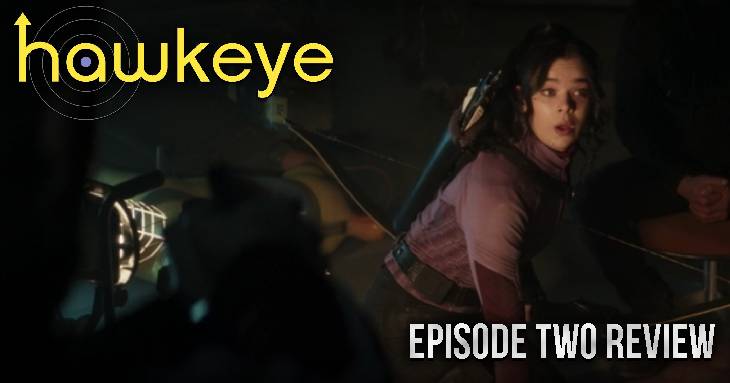 WARNING: Spoilers ahoy for episode 2 of Hawkeye! Proceed at your own risk!

This episode literally starts right where the premiere ended, much like how issues of a comic do. Clint and Kate retreat to Kate’s hideout where he explains that the thugs she encountered with the Tracksuit Mafia. No sooner does he tell her that than the Mafia shows up. The heroes escape without the suit.

Naturally, Kate acts like a total fangirl and wants Clint to help her solve Armand’s murder. Clint refuses but needs to retrieve the Ronin suit which he tracks down to a LARP event. This leads to a very entertaining scene where legit badass Hawkeye has to obey rules in order to retrieve his Ronin suit from a larper.

With the suit retrieved, Vlint calls his family and tells them he’ll miss the flight home. Laura understands and knows this means he will be tangling with the Tracksuit Mafia. Soon afterward, Clint lets himself be captured so he can presumably be brought before Yelena Belova.

Meanwhile, Kate sits down to dinner with her mother and Jack. She suspects Jack is Armand’s killer and challenges him to a fencing duel. She repeatedly wins but knows Jack is holding back. She tries to update Clint only to get another person answering Clint’s phone. She tracks his phone to (where else) an old warehouse. She tries to make a surprise entrance but fails miserably and literally falls on her face.

In the final scene, one of the thugs alerts a mysterious woman that they have Clint and Kate in custody. She shoos him off and returns to listening to loud bass sounds through her sound system. Enter Echo…

An excellent follow-up to the premiere. This series is well on its way to being another top-notch MCU entry. I’m assuming Echo is a pawn to Yelena and will turn against her in the end.