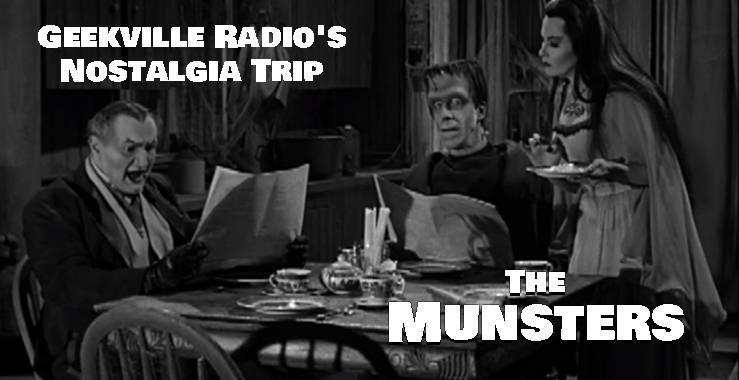 Welcome to the latest edition of Geekville Radio’s Nostalgia trip, where we take a trip down memory lane with entertainment from the past.

Today, we have a long-time family favorite, The Munsters. Seth is joined as usual by “Crazy Train” Jonathan Bolick and is also joined by “Uncle Greg” Ochaba.

The Munsters ran from 1964-1966 on NBC and was considered competition for another monster-like family show, ABC’s The Addams Family. However, unlike The Addams, The Munsters always seemed to be oblivious to the fact that they all looked like monsters. They were a loving family who tried to do the right thing, but everybody was scared of them for some reason.

Believe it or not, versions of a show starring these Universal-owned monster properties had been pitched long before getting picked up by NBC. Concepts go back to the 1940s from Bob Clampett of Beanie & Cecil fame. It wasn’t until The Addams Family was pitched to ABC that NBC agreed to carry the show. Producers Joe Connelly and Bob Mosher, who created Leave it To Beaver, ran the show.

Herman Munster – Played by the brilliant Fred Gwynne. He is modeled after Frankenstein’s monster. Despite looking terrifying, Herman as a genuinely kind person who loves his family deeply. He’s also often depicted as being a bit aloof and unaware of his strength limits. It was revealed that Herman was created by Dr. Frankenstein.

Lilly Munster – Portrayed by the lovely Yvonne DeCarlo. She is appropriately modeled after The Bride Of Frankenstein. She’s probably the smartest person in the family and tends to be the nurturing mother figure.

Grandpa – Occasionally referred to as The Count, and “Sam Dracula”. Grandpa was played by Al Lewis and is modeled after Dracula. He’s the craziest one in the family because of the Trope of so many shows having the nutty character whose always trying something new.And his experiments often lead to the main dilemmas of the episode. He uses various types of magic over the course of the show, including having the ability to turn into a wolf.

Eddie Munster – The child of the family who is a mix between a vampire and a wolfman. He was played by Butch Patrick, who I think is the only remaining living cast member.

Marilyn Munster – Unlike the rest of the family, Marilyn looks like a normal woman. She loves her family as well. She also doesn’t see any of her relatives as looking strange. Her love life has also been a recurring theme, with potential boyfriends usually running in terror after meeting the family. And poor Marilyn usually blames herself because she thinks her family is a good and loving one. She was portrayed by Beverly Owen for the first half of Season One and by Pat Priest for the rest of the show’s run.

There are for pets. Spot, a dragon who is never fully seen, Igor, Grandpa’s pet bat, Charlie, a raven who also serves as their cuckoo clock, and Kitty, a normal-looking cat who roars like a lion.

The Munster Koach – The Koach was an amalgam of three Ford Model Ts and was built by George Barris, who made several iconic cars for TV shows over the years. This is the car you see most often during the show’s run. In the show, Lilly bought a car and a hearse and had them put together as a birthday present for Herman

Drag-U-La – The other car is called Drag-U-La and was built by Grandpa to win back the Koach after Herman lost it in a drag race. This is the car designed to look like a drag-racer coffin with a tombstone for a front end. It’s also the car Rob Zombie wrote his song of the same name for.

Even though the show ran for only two years, The Munsters made a huge cultural impact. Since 1964, there have been two movies with the original cast, and several remakes and reboots. Today, the show is currently streaming on NBC’s Peacock, so you can legally watch it on that service’s free tier.

As mentioned, Train has a Halloween-themed Spotify list which you can access below. If you have any feedback, we’d love to hear it!