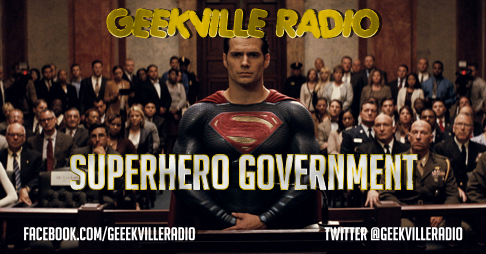 In The News: The Batman finally has its director in Matt Reeves. Here is what the Cloverfield director said about helming the Affleck Batman movie.

I have loved the Batman story since I was a child.He is such an iconic and compelling character, and one that resonates with me deeply. I am incredibly honored and excited to be working with Warner Bros. to bring an epic and emotional new take on the Caped Crusader to the big screen.

Plus The Nerdist reports that there may be a Nightwing movie in the works. How could a Nightwing standalone film fit into the DC Movie Universe? And who should fill the former Boy Wonder’s shoes? Both Seth and Train have actor picks.

NBC’s Powerless has been airing for a month. Has Seth warmed up to the show?

In the main part of the show, Seth and Train discuss superheroes and where they might fit in the US Government. Thanks to listener Marcus Russ for the concept. Here are all the government positions filled.

In the final segment of the show, Geekville Radio pays tribute to the life and career of actor Bill Paxton