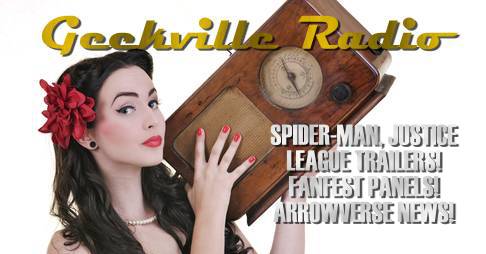 In case you’ve been living under a rock, Sony unveiled the second Spider-Man trailer. This new trailer gives us more of a look at the plot, plus a peek at the role Tony Stark plays in Spidey’s life. Not only that wee see more of Michael Keaton’s Adrian Toomes aka The Vulture.

Not to be outdone, Warner Bros released the newest Justice League trailers which gives us Aquaman, Parademons, and Commissioner Gordon

In Netflix news, Iron Fist has become the second most watched Marvel Netflix to date. Only Luke Cage has more impressions.

“The analytics firm calculates the series earned 63.2 million ‘demand expressions’ in its first three days – that’s less than the 69 million of “Luke Cage” but ahead of both “Jessica Jones” (51m) and “Daredevil” (23m).”

In Star Wars news, the Last Jedi trailer will be released on April 14th, during Star Wars Celebration. Also, in what may be a major curve ball to fans, Han Solo’s real name may not be Han Solo.

“Iger revealed that the film, “picks up with Han Solo when he was 18 years old and takes him through when he was 24. There are a few significant things that happen in Han Solo’s life, like acquiring a certain vehicle and meeting a certain Wookiee that will happen in this film. But you will also discover how he got his name.””

Over in the Arrowverse, Season 5 villain Vigilante’s alter ego is somebody we already know. However, we may not find out who he (she?) is until Season 6.

We know who it is, but we were kind of intrigued by the idea of having a mystery that led into the next season,” Guggenheim told us at Paleyfest 2017. “We were excited at the prospect of just letting this play out for a little while longer, and it gives us something cool to do in Season 6.”

The second half of the show, Seth and Crazy Train talk more major plot reveals in the Arrowverse TV Shows, including the highly anticipated Supergirl/Flash Musical, the return of Captain Cold to Legends Of Tommorow, and Prometheus’s effect on Ollie’s psyche.

The Arrowverse talk does not end there, as Seth talks the Heroes & Villains FanFest, which had appearances by Stephen Amell, John Barrowman, David Ramsey, Charlotte Ross, Katie Cassidy, Willa Holland, Echo Kellum, Katrina Law, Robbie Amell, Caty Lotz, Brandon Routh, and Neal McDounough. If you’re a fan of any Arrow show, this is the stuff for you!

On top of that, there was an Agents Of SHIELD panel with Chloe Bennett and Brett Dalton.

Not to be outdone, Train discusses attending the South Carolina Comic-Con and the guests that were there.