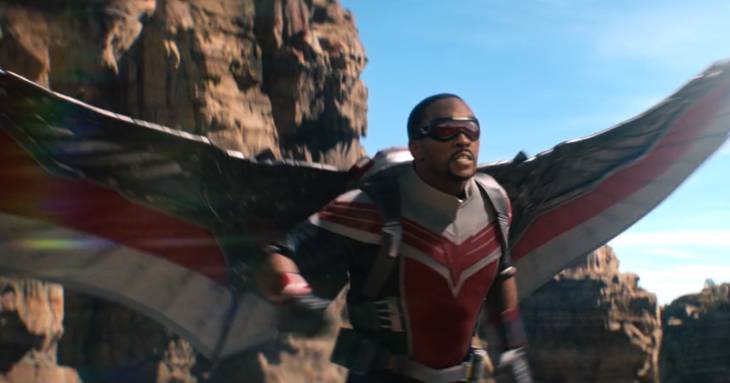 The highly-anticipated premiere episode of The Falcon and the Winter Soldier is finally here! And boy did start off with a bang! Falcon, aka Sam Wilson (Anthony Mackie), jumps out of a C-130 to foil some terrorists who kidnapped an Air Force Captain. This group, known only as LAF at this point, is being led by Batroc (George St. Pierre). What follows is an exhilarating action sequence of Falcon flying through the canyons of Tunisia battling helicopters and gliding terrorists.

Falcon saves the day and rescues the Captain. His buddy Lt. Torres informs him of a new group called The Flag Smashers. In short, they preferred how things were during The Blip (or “Snap”) and want a world without borders. More on them later…

Sam goes to Washington DC where he formally hands over the Captain America shield to The Smithsonian Institute where it would be displayed in a section of the museum devoted to Cap. Jim Rhoades (Don Cheadle) spends some time with Sam afterward and the two lament the shape of the world.

Bucky is naturally having trouble adjusting to life outside of being an assassin. His therapy sessions are rather tense, as he is plagued by memories of his assassin days, and his therapist reminds him that he has to make amends with the people he has wronged. He is encouraged by his elderly friend Yori to date the sushi waitress at their local restaurant. However, that soon turns awkward when Bucky realizes that he killed Yori’s son years ago while on a mission.

Sam goes to Louisiana to visit his sister Sarah and her sons. Sarah’s fishing business has fallen on hard times and she is facing possible bankruptcy. Sam is able to convince her to apply for a loan to save the boat and the business.

Meanwhile, Torres has tracked Flag Smasher activity to Sweden. He witnesses a robbery and attempts to intervene, only to be soundly pummeled by a Flag Smasher with superhuman strength.

Back in The States, Sam and Sarah are denied a loan due to the chaotic nature of the last five years. While Sam is getting briefed by Torres on what happened in Sweden, he sees on TV the sudden unveiling of a NEW Captain America….

As some fans may know, The Falcon and the Winter Soldier was supposed to be the first Marvel series to air on Disney+ but COVID messed up the schedule. WandaVision then took its place despite being a very different series creatively.

Unlike Wandavision, The Falcon and the Winter Soldier feels like an MCU story right from the get-go. We have several familiar characters and a Hollywood blockbuster level opening action sequence. On top of that, we got great character interaction with Sam and Bucky both dealing with the absence of Steve in their own ways. Plus, it will be fun to see what happens when New Cap eventually crosses paths with Sam and Bucky.