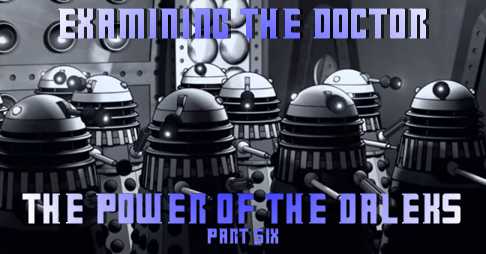 It’s been a long but fun ride as we close out The Power Of The Daleks. Mark returns to help Seth give his knowledge and insight for this animated adaption of the long lost Doctor Who classic.

Recently released on DVD and Blu-Ray, The Power Of The Daleks is an animated reconstruction of the first Patrick Troughton story originally broadcast in 1967. It aired only once in The UK, and was one of the casualties of a massive film erasing measure by The BBC in the early 1970s. Fortunately, the audio still exists and the animated reconstruction was commissioned by The BBC.

Join Mark and Seth as they bring their signature blend of historical knowledge and humor into Part Six of The Power Of The Daleks!

Need the episodes? Hop on over to Amazon and get it for instant streaming, DVD, and Blu-Ray!