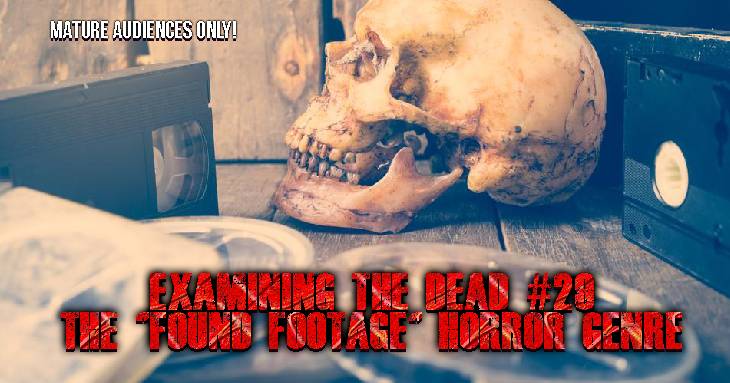 Examining The Dead returns for the summer of 2021! Train and Seth talk about the release of A Quiet Place 2 and The Conjuring 3. Plus game news in Diablo II: Resurrected. The latter half of the show is devoted to the “found footage” genre of horror movies.

The “found footage” genre is actually nothing new. In fact, it could be argued that classic horror literature such as Mary Shelly’s Frankenstein and Bram Stoker’s Dracula which were written in the form of personal notes and journals were inspirations for modern media takes.

Orson Welles’s famous radio take on War Of The Worlds fooled some people into thinking the world was under alien attack. Italian “mondo” films in the 1960s eventually led to the Faces Of Death series in the 1970s.

Cannibal Holocaust was released in 1980 and is considered to be the first of the true “found footage” style movies. Other TV movies, such as 1983’s Special Bulletin was filmed like it was a network TV news broadcast. The 1990s saw video games like Night Trap and Five Nights at Freddy’s use a security camera footage format to tell their stories.

A decade after Blair Witch, the Paranormal Activity series of films grossed hundreds of millions at the box office. Even reality shows like Ghost Hunters are likely very inexpensive to produce, thus likely making a return on investment.

Are there any “found footage” style movies you think could be added? Let us know below!