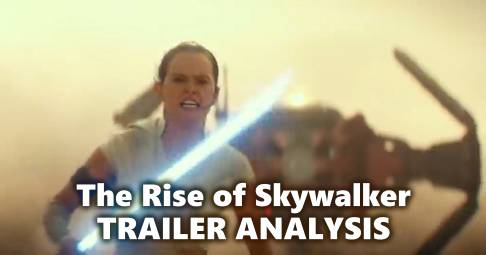 At long last, LucasFilm has released the first trailer for Star Wars Episode IX, which is said to be the final episode of The Skywalker Saga. The title was also revealed to be The Rise Of Skywalker.

Some time ago, there was a heavily circulated rumor that Episode IX would be called Balance of The Force. We commented on that in a previous podcast, and what that might mean. We even used information published in 1997 as proof. And we’re here to do it again with the real title.

So what did we do upon seeing the new trailer? Why we did what every other Star Wars geek would do and over-analyze practically every frame so we can speculate on what we think is to come.

Director JJ Abrams said that The Rise of Skywalker will tie up all three trilogies, making it an end to the saga.

For more in-depth commentary, you can follow along with the accompanying podcast. All the images below are of course copyright LucasFilm/Disney and are presented for informational purposes.

Without further ado, on with the analysis so we can yell at everybody else how wrong they are (just kidding…)

Over Celebration weekend, we saw several images that may give further hints as to what is going on.

What do you think? Sound off below!!