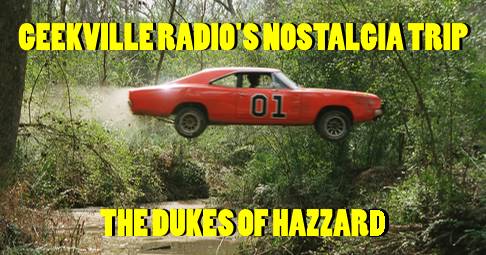 It’s the last show of the month. And to be a little different, we are debuting a new segment. We like to call it Geekville Radio’s Nostalgia Trip. The debut edition of Geekville Radio’s Nostalgia Trip is devoted to the classic 1980s TV show The Dukes Of Hazzard. Seth “Zandrax” Zillmann and “Crazy Train” Jonathan Bolick talk the history of the show and why it is so iconic almost 40 years later.

As ardent fans know, Dukes was actually spun off of a 1975 feature film Moonrunners, which had a very similar vibe. Both that film and the TV series were created by Gy Waldron, and are based on the stories of Jerry Rushing. Crazy Train provides a brief course in moonshine whiskey and moonshine running.

How well do you know the background of Bo, Luke, Daisy, and Uncle Jesse? No matter your level of Dukes fandom, you might learn a few things. Which Duke was a Vietnam Vet? Which was a star football player in high school?

And of course, what good are the heroes without the villains? JD “Boss” Hogg, Sheriff Roscoe P. Coltrane, Deputies Enos Strate and Cledus Hogg made up the recurring antagonists for The Duke family. Then of course there were the out of town strangers that would be up to no good each week.

Seth and Train also dive into the 1982-83 season which had the controversial replacement Dukes, Coy and Vance.

But perhaps most importantly, they talk the vehicles.

While Hazzard Country Georgia may not actually exist, Train does provide geographical evidence as to where Hazzard County would be on a map if it did. Don’t believe us? Listen to Train’s evidence and you’ll hear why.

If you’re a 70s kid like Train, an 80s kid like Seth, or even came to love Dukes Of Hazzard after the fact, there is something for you in this edition of Geekville Radio’s Nostalgia Trip. Our goal is that, regardless of your level of fandom, you’ll enjoy this podcast and maybe even learn something about what was arguably the most “Southern” TV show to ever air on television.

As mentioned during the show, Crazy Train has amassed a list of Outlaw Country songs for Spotify, which fit perfectly with the attitude of Dukes Of Hazzard.

Look up our shows on Apple Podcasts and Google Podcasts. You can find us on Facebook and Twitter, and Crazy Train can be reached on Twitter. Give us a subscribe and let us know! We encourage your feedback!