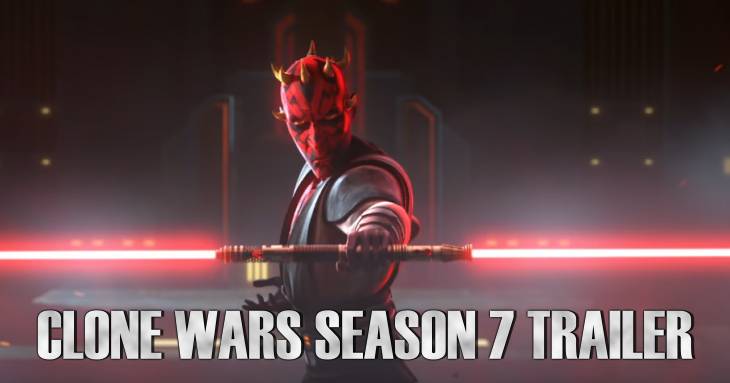 Lucasfilm released a trailer for the seventh and final season of Clone Wars. Several characters make their return in it, including Darth Maul, Ahsoka Tano, and Bo-Katan Kryze. Not only that, some hints and references are made to both The Sequel Trilogy and The Mandalorian TV series.

The trailer opens with a narration by Maul, who declares that the Jedi and The Republic will die. Maul is even seen interrogating a Clonetrooper using the same mind-probing Force power Kylo Ren uses on Poe Dameron in The Force Awakens.

Ahsoka, who has been absent since the fifth season, meets up with Bo-Katan and laments “We were trained to be keepers of the peace, not soldiers.” This, of course, echoes a statement made by Mace Windu during The Phantom Menace. After a few action shots on Mandalore, the trailer concludes by teasing a showdown between Maul and Ahsoka.

Judging by certain scenes in the trailer, it would appear that at least some of the story will take place during the events of Revenge Of The Sith. Mace Windu’s line “I sense a plot to destroy the Jedi” is used in the film itself. Plus, Anakin is seen communicating with Padme, who is clearly showing signs of pregnancy.

Mandalore is expected to be part of a story arc. Moff Gideon mentions the Siege Of Mandalore during the finale of The Mandalorian’s first season. That battle takes place during The Clone Wars. Bo-Katan, who is rumored to return in the second season of The Mandalorian, will likely play a big role in that battle.

Then there is the darksaber. While it was not shown in the trailer, it almost certainly will appear during the season. It was last seen in the hands of Maul, who presumably lost it when his reign over Mandalore was toppled by Darth Sideous. In fact, Maul himself was last seen being brutally tortured by his former master. His presence in the trailer would imply that he was able to escape Sidious’s clutches.

What did you think of the trailer? Sound off below!