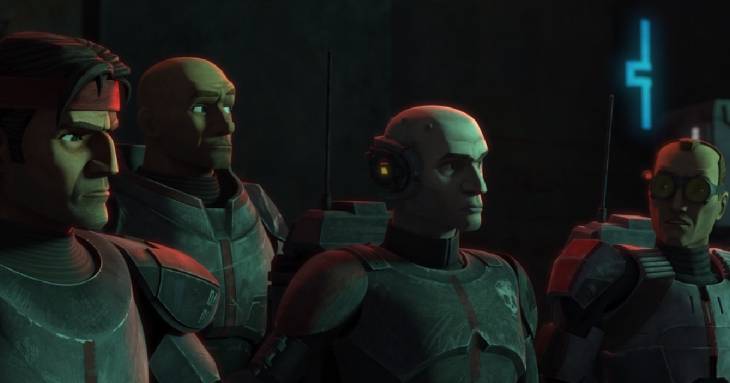 This week’s adventure leads The Bad Batch to a planet named in the original trilogy but never shown onscreen. With an episode name like Rampage, will we get giant lizards and wolfmen? Only one way to find out!

SPOILER WARNING! Do not proceed unless you want to know what happens in this episode!

The Batch are naturally concerned about a bounty hunter being sent after Omega so they stop at Ord Mantell to find out why. There, they meet Cid, a very sarcastic Trandoshian barkeeper. Cid agrees to find the information they need if they free a child from slave labor.

This is a very simple exchange, right? What could POSSIBLY go wrong? Unfortunately, a dragon-like creature takes the team out, leaving Omega alone on the ship.

Omega manages to distract the slavers by freeing a captive Rancor, which starts rampaging through the town. Hence, the name of the episode. It also happens to be the child the team needs to rescue. Wrecker manages to tire it out in battle.

Back at Cid’s place, Bib Fortuna is looking for the Rancor. Omega rides in on it and everybody is happy. Cid gives The Batch their cut of the money and says there can be more if they’re looking for more work.

Finally, after 38 years, we have the origin of one of the more memorable monsters in Star Wars lore. We now know the official story of how Bib Fortuna managed to procure a rancor for Jabba The Hutt. Though it may change the way we watch Return of the Jedi from now on. It’s also a pretty safe bet we’ll see Cid again.