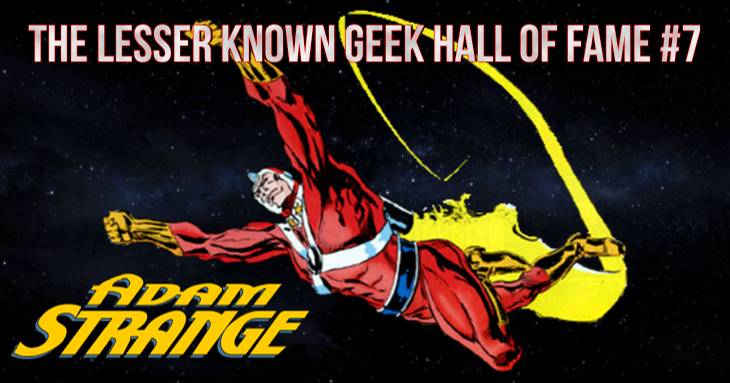 The latest inductee into The Lesser Known Geek Hall Of Fame is DC Comics’ rocket pack-wearing scientist Adam Strange. First appearing in Showcase #17 in 1958, Strange was hardly the first hero to don a rocket backpack. However, unlike his movie serial predecessors, Strange is still around today.

In the 1950s, Superheroes were not a major selling genre in comics. Most comics focused on gritter stories, westerns, horror stories, crime dramas, etc. The only DC superheroes to survive these last days of The Golden Age were Superman, Batman, Wonder Woman, and Superboy. That’s it. Four heroes (or three, if you count Superboy and Superman as the same character).

Jet engines were the wave of the future. Humans were also in the infancy of space travel. This was a boom period for science fiction, so it only made sense that comic publishers would try to capitalize on the popularity.

In 1957 DC Comics editor Irwin Donnenfeld asked two writers, Jack Schiff and Julius Schwartz, to each create a new sci-fi hero. One from the future and one from the present. Schiff got the first pick and chose the future hero. Schwartz was happy with this because he felt it would be easier to make a present-day character relatable.

Schwartz got inspired by space travel and decided his hero would be the first man in space. Thus, he gave him the name Adam from The Bible. Artist Murphy Anderson created Adam’s look and gave him a rocket pack like those seen in sci-fi serials such as Commando Cody and Rocket Man. A few details added and Adam Strange was born!

Adam Strange was an archeologist who accidentally found the Zeta-Beam, which instantly transported him to the planet Rann. There he met Alanna, whose father explained the Zeta-Beam was placed on Earth to potentially seek out intelligent life, who could then find the planet from there. However, the beam somehow became a transportation beam since then. Before Adam is transported back to Earth, he was given a schedule of when the Zeta-Beam would activate again. He then used that schedule to travel back to Rann and defend it from evil forces.

Adam Strange made his debut in the pages of Showcase #17 in 1958. Shortly after that, he started appearing regularly in Mystery In Space. The character proved popular enough to be the main attraction in that book well into the 1960s.

A few years prior to introducing Adam Strange, Showcase had been used to debut the new Barry Allen version of The Flash. With the success of Adam Strange, Julius Schwartz looked to other superheroes to update. Within a few years, the new versions of Golden Age characters were mixed in with new original characters like Hawkman and The Atom.

Adam Strange was an archeologist who was very quick-thinking. For most of his existence, his abilities were entirely science and tech-based, much like Flash Gordon and Buck Rogers. This makes him like a space-faring Indiana Jones.

His most obvious feature is the rocket pack and spacesuit that he uses to fly through the air and into space. He uses various types of energy weapons and blasters. He also has the Zeta-Beam which allows him to instantly travel through star systems instantaneously.

During the events on Infinite Crisis, he was blinded. He was cured of his blindness through a set of cloned eyes. These new eyes gave him the ability to see the entire electromagnetic spectrum.

However, since The New 52 reboot, Strange was depicted as already having the spectrum vision.

As always, we are open to suggestions for inductees. If there’s anybody you’d like to hear us talk about, let us know below!