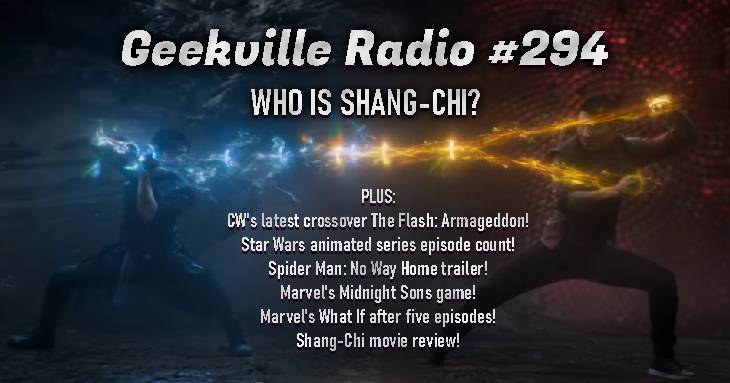 Season 8 of The Flash will open with the latest “Arrowverse crossover” called Armageddon. This time the crossover will not be a standalone mini-series but simply the first few episodes of Season 8. Despero is slated to be the villain with Arrowverse alumni Cress Williams and Kathleen

A lot of questions were raised in the first Spider-Man: No Way Home trailer. Is this the same Doctor Strange? Could the next Sinister Six villains be from other universes? And why the heck is the Sanctum Sanctorium snowing indoors?

Marvel’s “What If…?” has already had vastly different feeling episodes. Captain Carter, which kept the swashbuckling feel of Captain America: The First Avenger. Similarly, the episode that depicted T’Challa in space kept the humor of Guardians of the Galaxy. But the next two were VERY dark and bleak.

BREAK – Examining The Doctor looks at Genesis of the Daleks!

The feature segment of the show is devoted to explaining the character of Shang-Chi and his creation in the early 70s. Like Luke Cage and Iron Fist, Shang-Chi was inspired by exploitation movies. Specifically the “chopsocky” genre of martial arts films. Marvel wanted to make comics based on the David Carradine TV show Kung-Fu. When that failed, they made Shang-Chi the son of Fu Manchu (yes THAT Fu Manchu).

When Marvel lost the rights to Fu Manchu, they retconned Shang Chi to be the son of a new character called Zheng Zu.

For the MCU, Marvel amalgamized Zheng Zu with another Asian villain The Mandarin. This new character is called Wenwu has the ten rings like The Mandarin but is also Shang-Chi’s father.

Seth and Train close the show by giving a spoiler-filled review of the MCU’s latest entry Shang-Chi and the Legend of the Ten Rings.