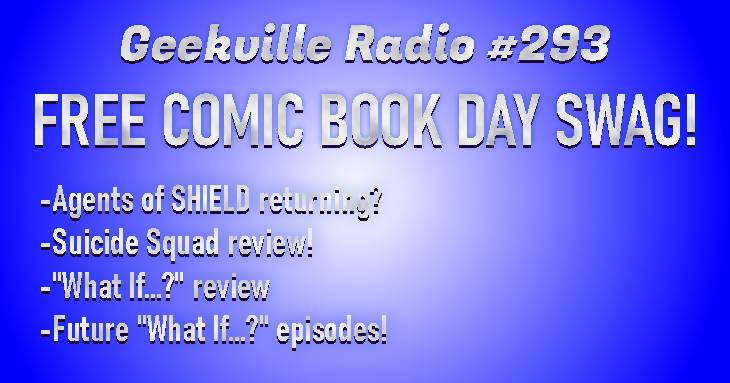 Seth and Train are back to talk Free Comic Book Day Swag. Plus, rumors on the possible return of Agents Of SHIELD and reviews of Suicide Squad and Marvel’s “What If…?”

Chloe Bennet had to back out of The Powerpuff Girls reboot for CW. Then Elizabeth Henstridge shared an Instagram about traveling to England. As luck would have it, both of those actions fall in line with Marvel’s Secret Invasion beginning production for Disney+. Since Samuel L. Jackson’s Nick Fury will be front and center, it makes sense that SHIELD agents would be backing him up. However, this is ONLY a rumor, and nothing has been confirmed

James Gunn’s The Suicide Squad seems to have disappointed at the box office, but it did not fail to entertain. For what it’s worth, Warner Bros. movies will go back to be theater exclusive in 2022. For comparison’s sake, Train puts media consumption in the 1980s against media consumption of today. VCRs anybody?

Train brings his knowledge of DC to the table in this review. Where’s Ratcatcher from? Where’s Corto Maltese? And did DC heavy hitters actually fight a giant starfish?

Marvel’s latest (and first animated) entry into The MCU is “What If…?”. As expected, each episode is a standalone alternate story based on a previous MCU movie. The debut episode depicted Peggy Carter taking the super-soldier serum when Steve Rogers is wounded.