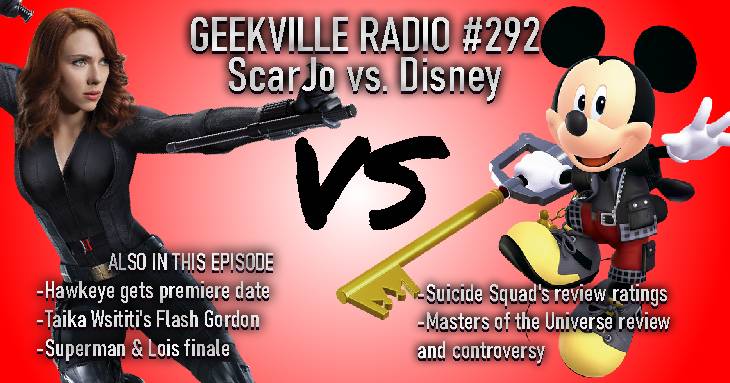 A bunch of news to talk about today!

Scarlett Johansson has sued Disney over breach of contract for Black Widow. The lawsuit states “Disney intentionally induced Marvel’s breach of the agreement, without justification, in order to prevent Ms. Johansson from realizing the full benefit of her bargain with Marvel.”

Disney responded, stating “There is no merit whatsoever to this filing. The lawsuit is especially sad and distressing in its callous disregard for the horrific and prolonged global effects of the Covid-19 pandemic. Disney has fully complied with Ms. Johansson’s contract and furthermore, the release of Black Widow on Disney+ with Premier Access has significantly enhanced her ability to earn additional compensation on top of the $20m she has received to date.”

The National Association of Theatre Owners issued a statement blaming the streaming release on the film’s disappointing box-office performance.

Marvel’s November MCU release, The Eternals, will not be getting a streaming release.

Marvel has revealed the premiere date for Hawkeye, the next MCU series for Disney+. The Jonathan Igla (Mad Men) run series is set to debut Wednesday, Nov 24th. Jeremy Renner reprises his role as Clint Barton/Hawkeye and Florence Pugh returns as Yelena Bolova. The series also sees Hailee Steinfeld playing Hawkeye’s protege Kate Bishop, Tony Dalton suiting up as Swordsman, and Alaqua Cox portraying the deaf hero Echo. Episodes will be directed by Rhys Thomas along with Bert and Bertie.

Taika Waititi will be helming the big screen return of Flash Gordon. While it was originally set to be an animated film, it has been changed to a live-action feature. Waititi allegedly had his staff watch the 1980 film before they started work on Thor: Love and Thunder.

The season finale of Superman & Lois is set to air on August 17th. The penultimate episode, “Eradicator”, will air on the 10th.

The final two episodes will air on the 10th and 17th, Eradicator and Last Sons of Krypton. Tyler Hoechlin hopes to play Superman for a long time.

The James Gunn helmed DCEU feature currently sits at 96% at Rotten Tomatoes. This makes it DC’s best-reviewed film to date. For comparison

Masters of the Universe: Revelation hit Netflix last Friday. Fans have criticized the decision to kill Prince Adam/He-Man (TWICE!). Seth gives his review of the first five episodes and thoughts on the lingering controversy.