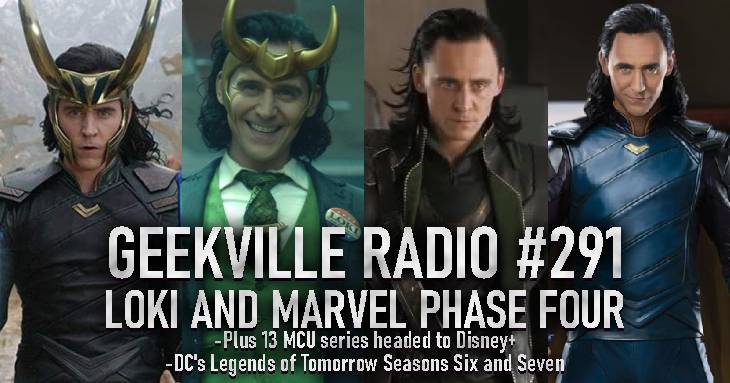 Train returns to the airwaves and joins Seth to talk news on DC’s Legends of Tomorrow and the upcoming 13 (!?!) Marvel MCU series for Disney+. Plus, thoughts on the Loki season finale and predictions on what might be in store for Phase Four.

San Diego Comic-Con had a panel with the cast and crew of DC’s Legends of Tomorrow that talked about what’s to come in the rest of Season Six and what we can expect in Season Seven.

Perhaps the most surprising news was that John Constantine will be exiting The Waverider.

As everyone who loves him knows, in the end, John Constantine will walk his path alone. The time has come for John to part ways with the Legends, and for me to part ways with John. I’m really excited to be creating this new role on the show and having some fun with it — discovering how this new character fits in and causes some trouble for the Legends

Matt Ryan will stay on as a new character, Gwyn Davies, who does not appear to be based on any existing Disney character. Dr. Davies will help The Waverider crew after they get stranded in the early 20th Century.

Dominic Purcell will also be exiting the show. This will mark the end for all of the original Waverider crew since all the other characters currently on the show joined in the second season or later.

While arguably not a member of the crew, Gideon will once again return to human form and be played by Amy Louise Pemberton. There will also be a soundtrack released in August with many of the songs played or performed during the show’s run.

Our detailed written review of Loki’s Season Finale is here.

As expected, we got our introduction to the MCU’s Kang. However, it was in a more humanoid form “He Who Remains”. While in the comics, He Who Remains was a separate character, he was made a variant of Kang The Conqueror in this series. In fact, his outfit was similar to what Kang wore as Immortus.

What can we expect from Phase Four? Seth and Train give their predictions on everything from which Loki is which to who could be made a “new big three”.