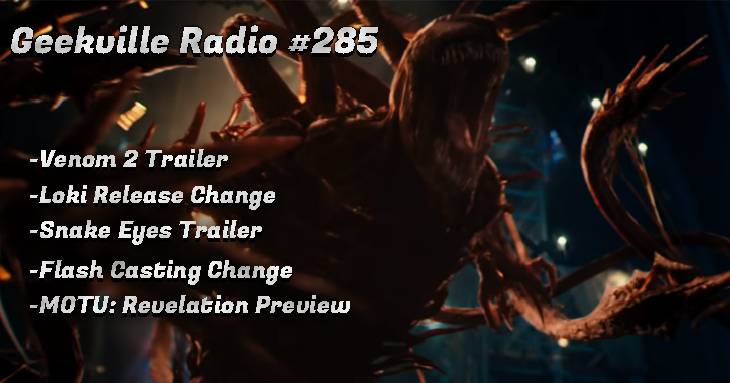 Seth and Crazy Train are back to talk the news with looks at the Venom 2 trailer, Loki, Snake Eyes, The Flash, and Masters of the Universe: Revelation.

Loki, the latest in the Disney+ Marvel MCU TV series, has moved its premiere date up to June 9th. It was previously set for June 11th. That change is presumably so it won’t start on the same day as Star Wars: The Bad Batch, which drops in the usual Friday.

The Flash series regulars Carlos Valdez and Tom Cavanagh are leaving the series in Season 7. While the door appears to be open for any future returns, it looks like the two will not be around much in Season 8.

Several promotional stills have been released for Kevin Smith’s He-Man Netflix series Masters of the Universe: Revelation. The animation will be a more traditional 2D take than the popular 3D CGI and the cast is a who’s who of voice-acting. Mark Hamill reportedly said he couldn’t say no to being Skeletor. Not only that, we also get a look at the action figures set for release this summer as well.