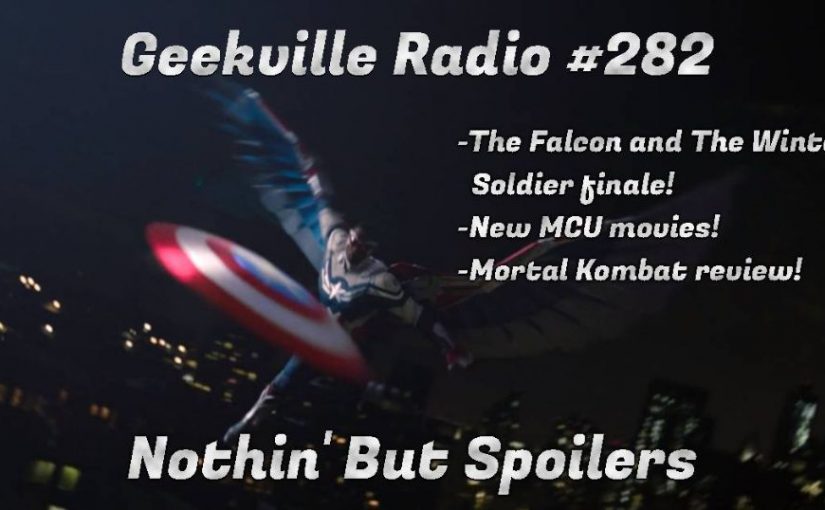 It’s a giant-size spoiler-filled edition of Geekville Radio! Seth and Train review The Falcon and The Winter Soldier finale, including what it did well and what may have felt rushed. Then they talk about the MCU news that hit after the finale aired. Finally, they review the Mortal Kombat movie with comparisons to previous films in the franchise.

1:00 – The Falcon and The Winter Soldier Finale

The Falcon and The Winter Soldier finale aired last Friday. Every episode had glowing reviews except for this final episode. Did it feel rushed? Were all the loose ends effectively tied up? And who the heck is on whose side anyway?

All these questions and more are answered along with predictions for Secret Invasion and other future movies!

Here is the song Train mentioned during the review: “Brothers In the Night” by Ray Kennedy

Marvel announced a fourth Captain America film with Anthony Mackie reprising his role as Sam Wilson. Not only that, the main writer for The Falcon and The Winter Soldier is co-writing the screenplay.

Not only that but a Dark Avengers movie screenplay is being developed. While that doesn’t necessarily mean the film will be made, it does mean that elements from TFATWS could affect the rest of the MCU

The much-anticipated Mortal Kombat movie reboot opened this weekend and was a box office hit. How does it compare to earlier film versions? Could there be a sequel? And will future games be affected by this movie’s reception?