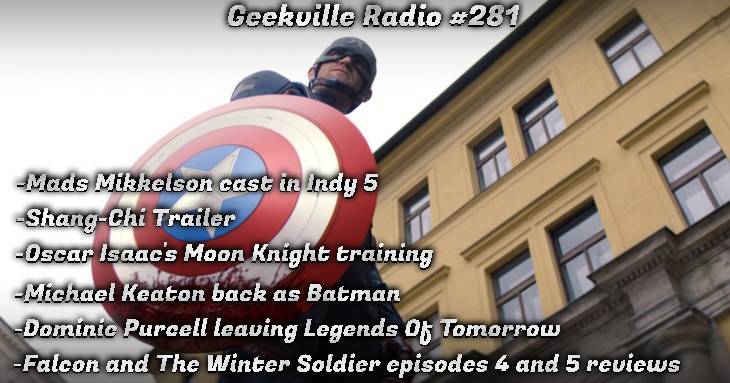 A big week for news and a pair of The Falcon and the Winter Soldier reviews!

Veteran villain actor Mads Mikkelson has been cast in the untitled fifth Indiana Jones film set for release in July 2022. James Mangold will direct. Harrison Ford, who will turn 80 around the time of the film’s release, reprises the title role. John Williams will once again score the music.

10:00 – Shang-Chi and the Legend of the Ten Rings trailer

Marvel debuted the first trailer for Shang-Chi and the Legend of the Ten Rings. Who is Shang-Chi and how does he fit in the MCU? Seth and Train give a brief history of the character and what we can expect come September.

Oscar Isaac has gone through some impressive training for the upcoming Disney+ series Moon Knight.

16:45 – Keaton Officially Back as Batman

The Wrap has confirmed that Keaton is indeed donning the cowl for the first time since 1992 to play Batman in The Flash. We discussed last year how Keaton might fit into the story.

18:25 – Dominic Purcell leaving Legends Of Tomorrow as a regular

Actor Dominic Purcell will no longer be a regular on DC’s Legends Of Tomorrow on CW. He will still appear on the show, but in a recurring capacity.

21:30 – The Falcon and the Winter Soldier reviews for Episodes 4 and 5

Marvel aired two episodes of The Falcon and The Winter Soldier since our last show. One was big on action and the other was big on story development. Who is the Power Broker? Who’s side is Val on? A black Captain America? These questions and more are answered.