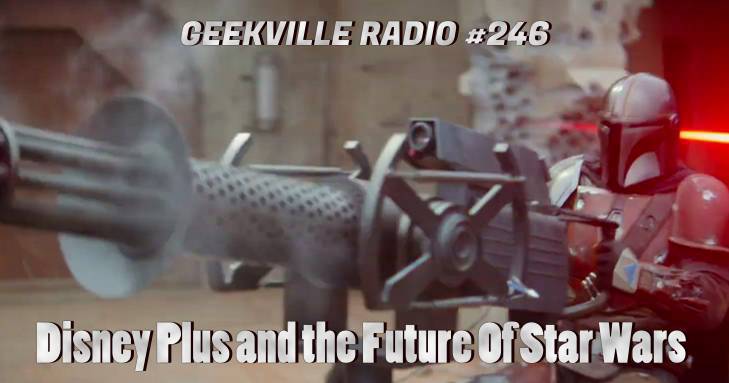 Disney + is here! I know it just kind of snuck up and surprised everybody without much fanfare (sarcasm of course), but it’s finally here and a ton of people are watching.

What are some of the first things on your viewing lists?

Obviously, there is all the Star Wars and Marvel programming to dive into. But that still leaves countless hours of classic Disney material to go through. Herbie movies, Robin Hood, The Aristocats, Jungle Book, and so much else.

As talked about in the show, here is the chronological order of Clone Wars episodes if you want to watch them like that.

Naturally, one of the top programs watched off the bat is The Mandalorian, which is the first true live-action Star Wars series.

We gave a spoiler-free review of the premiere episode on Tuesday. Now it’s time for the spoiler-filled review, including the surprise twist ending.

In yet another change in the infamous Cantina scene, Greedo now yells “Maclunkey!” before getting blasted by Han Solo. This change as of now only exists on the Disney+ edition of A New Hope.

Details have started to emerge over Game Of Thrones showrunners David Benioff and Dan Weiss’ departure from Star Wars. With a nine-figure deal with Netflix now official, could that be a conflict of interest? Could this have anything to do with Kevin Feige’s involvement in a Galaxy Far Far Away?

As we discussed back in episodes 201 and 202, the future of standalone Star Wars films may be in jeopardy. Bob Iger recently stated that fans are not as interested in standalone movies as they are for the Skywalker Saga

In the last topic, bot Seth and Train give predictions for The Rise Of Skywalker.

Do you have any comments or questions? Sound off below! What are you watching on Disney+?