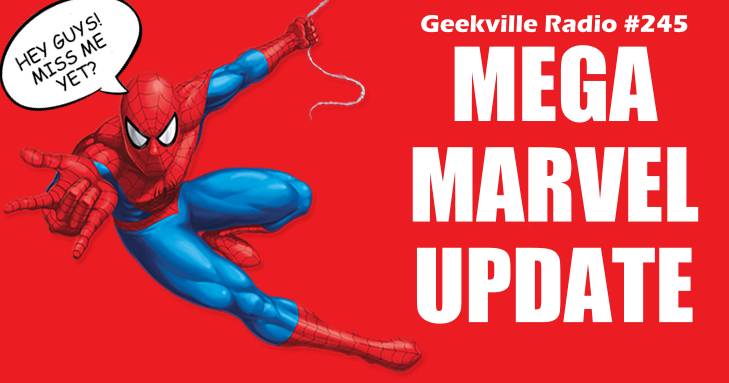 It’s a huge week of news, especially for Marvel MCU fans. Subjects are tagged with timestamps if you want to get right to them

The Hollywood Reporter broke the story last week that Marvel Studios President Kevin Feige will develop a new Star Wars movie. It certainly could be in response to the Sequel Trilogy fan reception, especially The Last Jedi. And, of course, the underwhelming performance of Solo. Given Feige’s track record with the Marvel films, it seems like a natural pairing.

With the deal being so new, it’s way too early to expect what the premise of the film will be. It is also not clear whether this will simply be one film or the first of many.

When Disney purchased LucasFilm and announced new Star Wars projects, fans speculated that this could be another multiple-movie franchise with standalone stories outside of the sequel films. Much like how Marvel Studios handled the MCU. One of the most appealing things about the MCU was how all the films were connected in some way, and how the Avengers movies utilized characters from them.

Likewise, one of the biggest criticisms of the new Star Wars films has been the lack of consistency. One of the reasons Colin Trevorrow left Episode IX was because his story heavily featured Luke Skywalker. So when Luke died in The Last Jedi, it made Trevorrow’s story useless.

This does not guarantee that the Sony/Disney partnership will be long term. It’s very possible, although merely speculated, that this will allow an onscreen reason for Spider-Man to break away and continue in Sony’s own movies with no further connection to the MCU. It is very possible Sony could cast Miles Morales to replace Peter at the end of the new deal.

(23:35) Marvel Studios will take over the Marvel TV shows

As fans have known for some time, Marvel has separate studios for movies and television, much like other companies. This meant that collaboration between TV shows such as Agents of SHIELD and the MCU was sometimes difficult because of this. Now that Marvel Studios will be taking over future Marvel shows, it opens the possibility for that to happen.

However, don’t expect characters like Daredevil or The Punisher to make big-screen appearances anytime soon. Since it is a different studio producing now, it could mean characters getting recast.

Footage of Black Widow shown at San Diego Comic-Con included a scene with Tony Stark. This has bolstered speculation that Robert Downey Jr. may not yet be done in the MCU. Some fans even complained, thinking that it cheapens Tony’s death in Avengers: Endgame.

It looks like, at least at this point, the footage of Tony will be cut footage from previous movies. Plus the movie will at least partially take place in the past, which means Stark (and Widow for that matter) will still be alive at that time.

The next Doctor Strange movie, Doctor Strange in the Multiverse of Madness, will feature Nightmare as the main villain. According to a Reddit post, former Doctor Who actor David Tennant is being considered for the part. Coincidentally, Tennant’s successor Math Smith is reportedly being looked at too.

Shang Chi and the Legend of the Ten Rings will take place between Infinity War and Endgame. Could we see Mandarin?

Also in the above Reddit link, Namor will be the main antagonist for Black Panther 2. He will battle T’Challa for control over Wakanda, and presumably . This is actually a story from the comics, so it would be a very fitting story. Plus, with the success of Aquaman, you can’t really fault Marvel for bringing in their shirtless aquatic king.