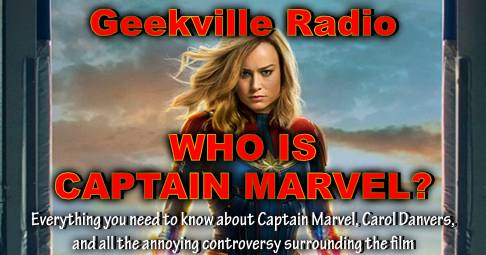 Captain Marvel is a character that has a lot of history, not the least of which has been that there have been multiple publishers laying claim to the name. This episode of Geekville Radio hopes to clear up several things about the character.

Back in 1939, Fawcett Comics created a character called Captain Marvel, who had superpowers such as flight, super speed, and super strength. DC Comics sued Fawcett, claiming copyright infringement on Superman, who also had many similar abilities. The legal proceedings lasted YEARS, but the courts eventually sided with Fawcett, stating DC did not properly maintain their copyright claims.

One of the fundamental differences between Superman and Captain Marvel was that Superman’s powers were based on him being an alien, whereas Marvel’s powers were magic based. All Billy Batson had to do was yell the word “Shazam!” and he became Captain Marvel.

Fawcett, tired of years of legal proceedings, stopped publishing Captain Marvel titles and got out of the comics business entirely in the 1950s.

DC eventually bought out Fawcett’s comic properties, meaning they gained control of all the Fawcett characters. This of course included Billy Batson and Captain Marvel.

But wait, it gets better…

Yet ANOTHER company, MF Enterprises, started publishing their own Captain Marvel title in 1966. Unlike Fawcett, MF’s Captain Marvel was an android who looked nothing like a superhero. This version was nowhere near as popular, and was canned after a few issues.

By the 1970s, DC was all ready to produce stories about their Captain Marvel. Except there’s one problem. Marvel Comics had registered the actual term Captain Marvel. That’s right, the name “Captain Marvel” had not, up to this point, gone through the proper copyright procedures.

This is the part of the real life story that many comic fans know. In the end, DC agreed to not refer to their character as Captain Marvel as long as Marvel published stories with their Captain Marvel. Since the word “Shazam” was so closely linked to DC’s property, DC’s version would start regularly being referred to as Shazam.

So that brings us to Marvel’s Captain Marvel, and the character about to be introduced to the masses in the latest blockbuster MCU film of the same name. What do people need to know about Captain Marvel?

First and foremost, Captain Marvel is closely associated with the alien race The Kree. Fans of the ABC series Agents Of SHIELD have seen the story develop about The Kree. As we’ll see in the film, The Kree are a militaristic race that have been at war with another race, The Skrulls, for millennia. While Skrulls are generally looked at as the villains, the war has been going on so long that neither race is truly considered “good” anymore.

The Kree have cosmic abilities, which means any Captain Marvel will as well. The Skrulls aren’t nearly as cosmically powered, but they do have the ability to shapeshift. This has lead to stories where famous characters have been revealed to have been Skrulls for years. These stories have lead to mixed receptions from fans.

Mar-Vell: The first Captain Marvel was, incidentally enough, named Mar-Vell. This is the only incarnation to have Stan Lee’s name connected to it. He and Gene Colan created the character in the mid 1960s.

Monica Rambeau: The second Captain Marvel was Monica Rambeau, created by Roger Stern and John Romita Jr. This was the Captain throughout the 1980s.

Genis-Vell: The son of Mar-Vell took over the mantle in 1993. Created by Ron Marz and Ron Lim, this is the look that a lot of fans probably remember.

Khn’nr: A skrull posing as Mar-Vell during the Secret Invasion storyline. This may or may not be what will happen with Jude Law in the movie. Khn’nr was created by Paul Jenkins and Tom Raney.

Noh-Varr: The last Captain before Carol, and was one of the Dark Avengers. Created by Grant Morrison and JG Jones.

And that brings us to Carol Danvers

Carol Danvers may be like the seventh Captain Marvel to come along, but she was a fixture in the Marvel Universe long before that. In fact, the character is over 50 years old.

She first appeared in 1968 as an Air Force security officer, and was an ally of the original Captain Mar-Vell. In the 1970s, she became Ms. Marvel. This is the name most associated with her throughout her run. The pilot aspect comes from the Ultimate Universe

She is a Human/Kree hybrid, which allows her to have the Kree abilities, while still keeping her human appearance. In the 2000s, she was also known as Warbird, and as Binary.

Her main powers include super strength, flight, and the ability to survive in space without air. Over time, she developed a “seventh sense” ability to see into the near future. As Binary, she also gained an energy absorption power. Simply put, she can absorb energy and dissipate it back out.

Seth, Train, and Leadbase dive into the controversial news surrounding the film’s release. They do not take political stances when we talk about things like this, but there are things that are pretty hard to ignore.

One other thing worth mentioning, we had this poll on our Facebook page asking people if they were planning on seeing Captain Marvel this weekend. After approximately 150 votes, it was still 57% to 43% in favor.

In the last segment of the show, Nic gives a detailed (SPOILERS!) review of Alita: Battle Angel, and gives comparisons to the Captain Marvel controversy regarding content

If you want to hear more about the “Strong Female Character” types, check out our second episode entitled “Warriors Of Estrogen” linked below

Also, check out the project Nic talked about at the end of the show, Comfort & Adam!