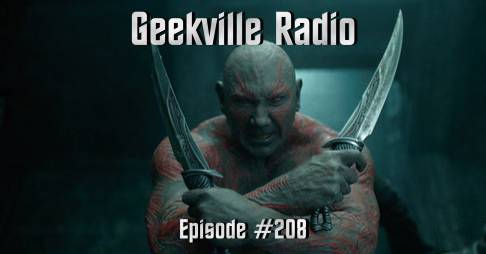 Geekville Radio is back with the usual co-hosts Seth and Crazy Train at the helm.

Dave Bautista has publicly stated that wants James Gunn reinstated as director for Guardians Of The Galaxy 3. Could this mean Drax is written out of the film? Could other actors follow suit? Heck Marvel themselves are backing Gunn, so what could be the outcome?

I will do what Im legally obligated to do but @Guardians without @JamesGunn is not what I signed up for. GOTG w/o @JamesGunn just isn’t GOTG. Its also pretty nauseating to work for someone who’d empower a smear campaign by fascists #cybernazis . That’s just how I feel https://t.co/Ym4FwruVDu

In another casting that has taken the geek world by storm, Ruby Rose has been confirmed to play Batwoman in the upcoming Arrowverse crossover in December.

Not to be outdone, Supergirl Season 4 continues to beef up its cast with geek favorites. Star Trek veteran Brent Spiner has been announced as the Vice President of Earth 38’s USA. And Sam Witwer will be the antagonistic Agent Liberty.

Speaking of TV, the big rumor going around is that the Star Wars live action series for the Disney streaming service will be a 100 million dollar ten episode season. Not only that, it will center around the planet Mandalore in a post-Return Of The Jedi galaxy. Fitting given creator Jon Favreau’s connection to Mandaloreans from The Clone Wars.