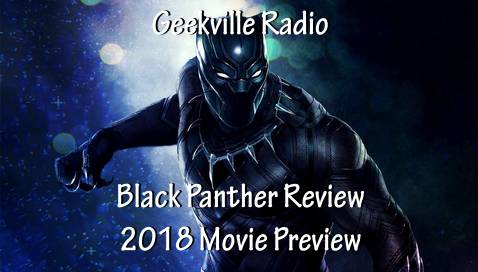 We’re dusting off the cobwebs for 2018 in the Geekville Radio studios with a JAM PACKED show with a ton of content. Join Seth and Crazy Train as they talk news, preview a TON of movies, and review Black Panther.

THIS WEEK IN GEEK NEWS

On the Star Wars front, rumors have surfaced as to the reason for Colin Trevorrow’s exit from Episode IX. Allegedly Trevorrow’s plans heavily involved Luke Skywalker.

Speaking of Luke Skywalker, Mark Hamill is set to have a Star on the Hollywood Walk Of Fame.

May – Avengers: Infinity War, “Untitled Deadpool Sequel” (They should just keep that name), and Solo.

The final segment of the show is devoted to a thorough (that means SPOILERS) review of Marvel’s latest blockbuster Black Panther. Everything from the acting to the accuracy to the comics are discussed. Does the movie live up to the hype? A must listen for Black Panther fans looking to fiind out more about the character.

All this and more in another fun-filled Geekville Radio.